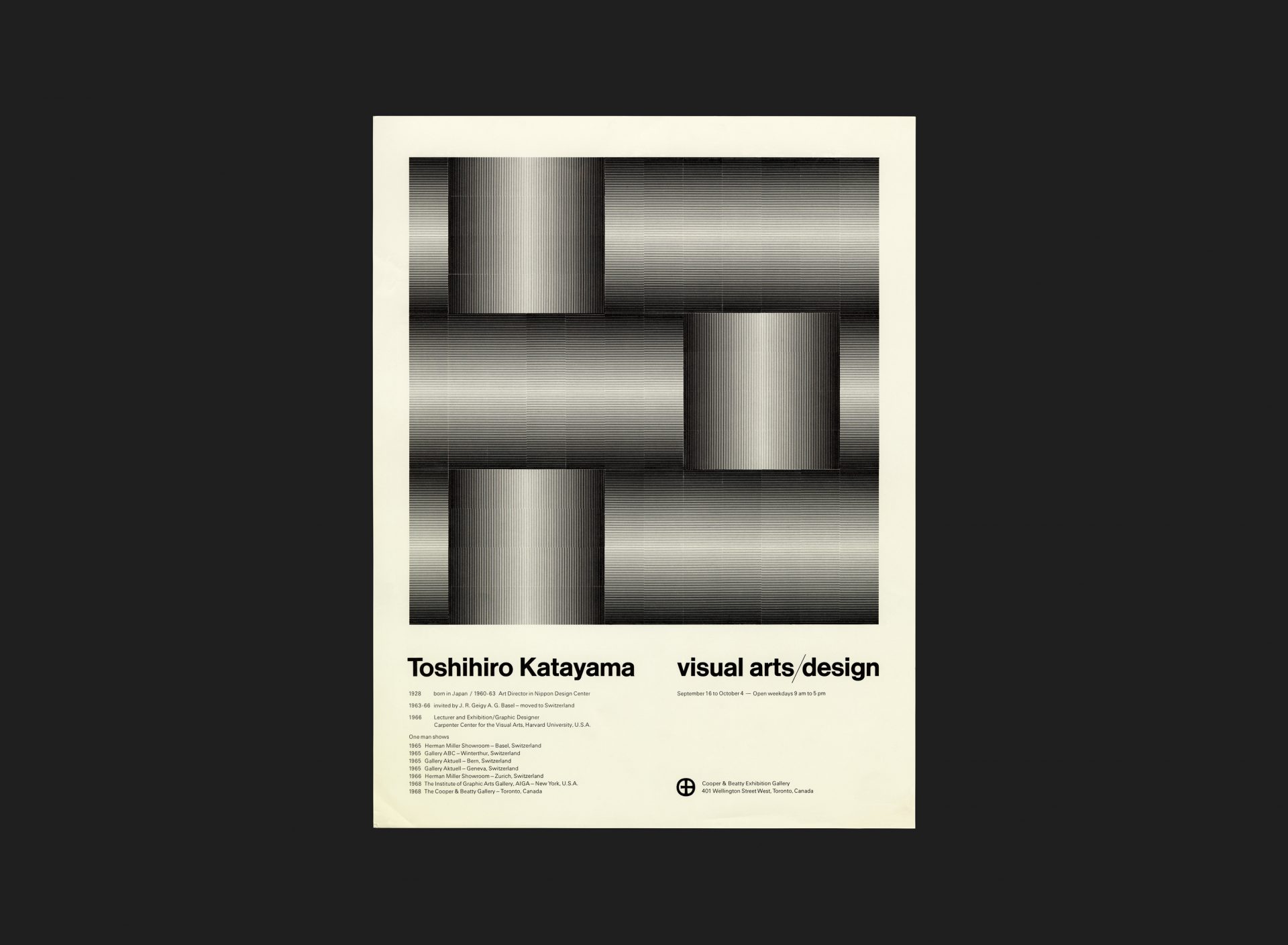 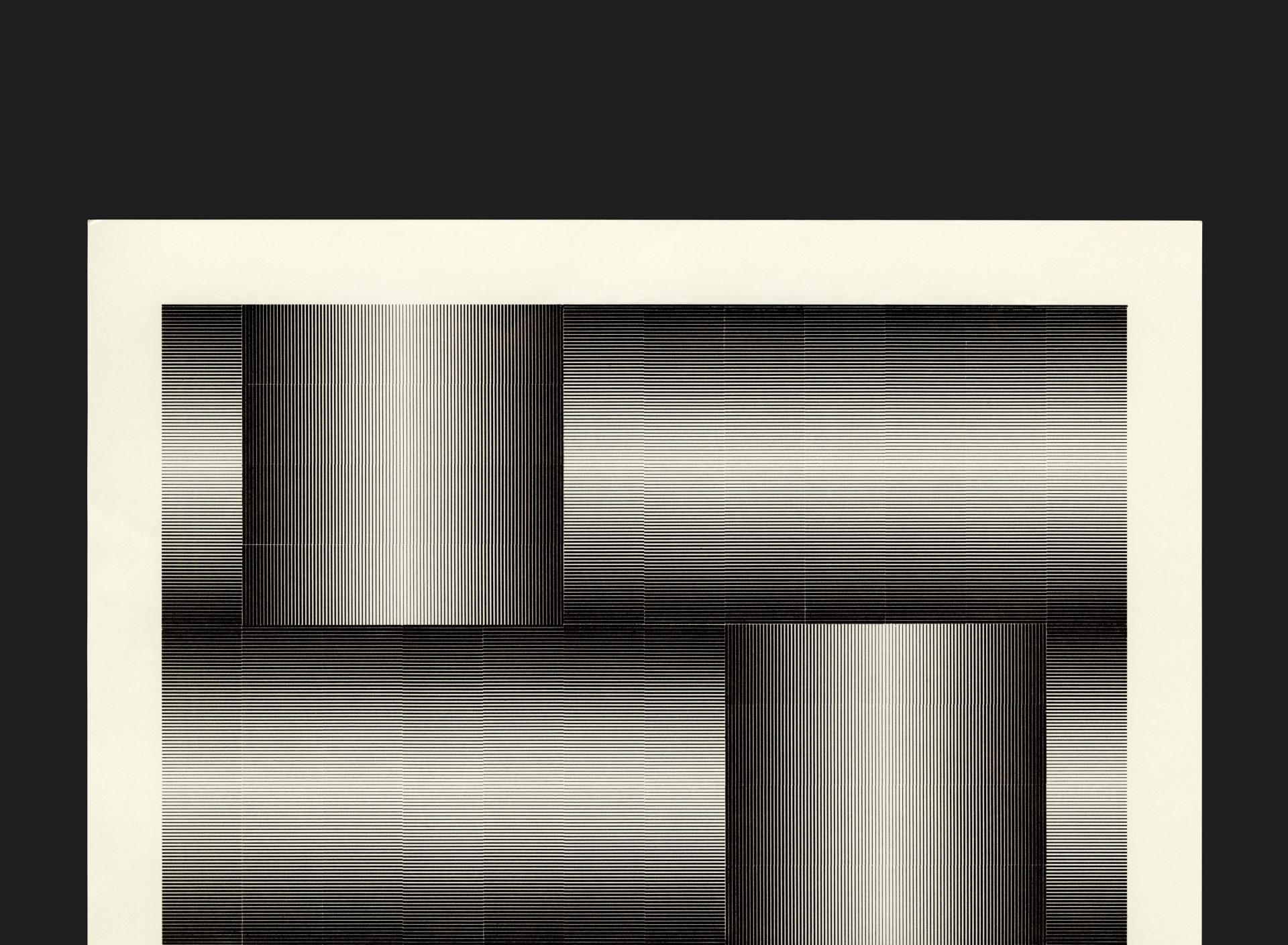 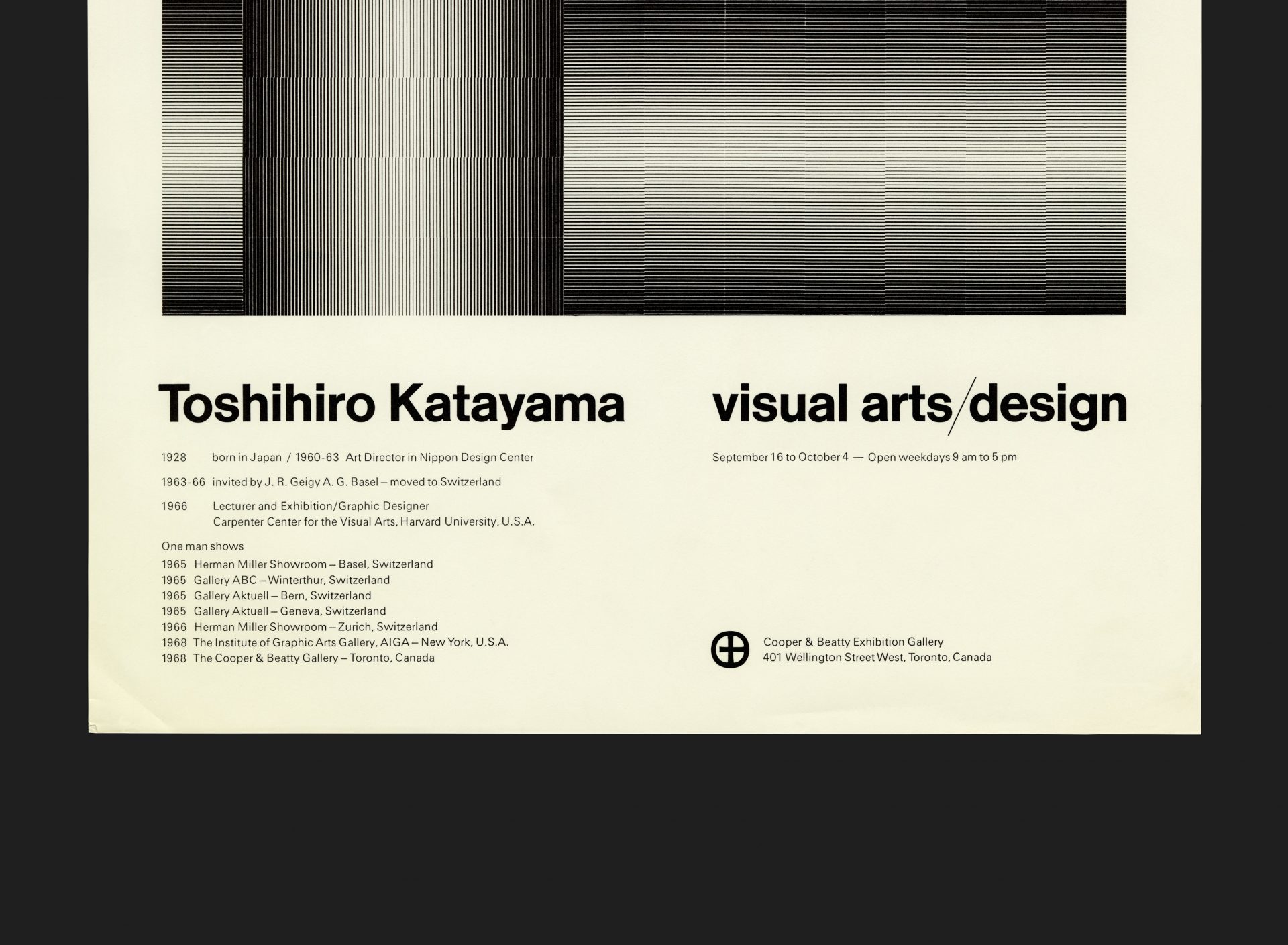 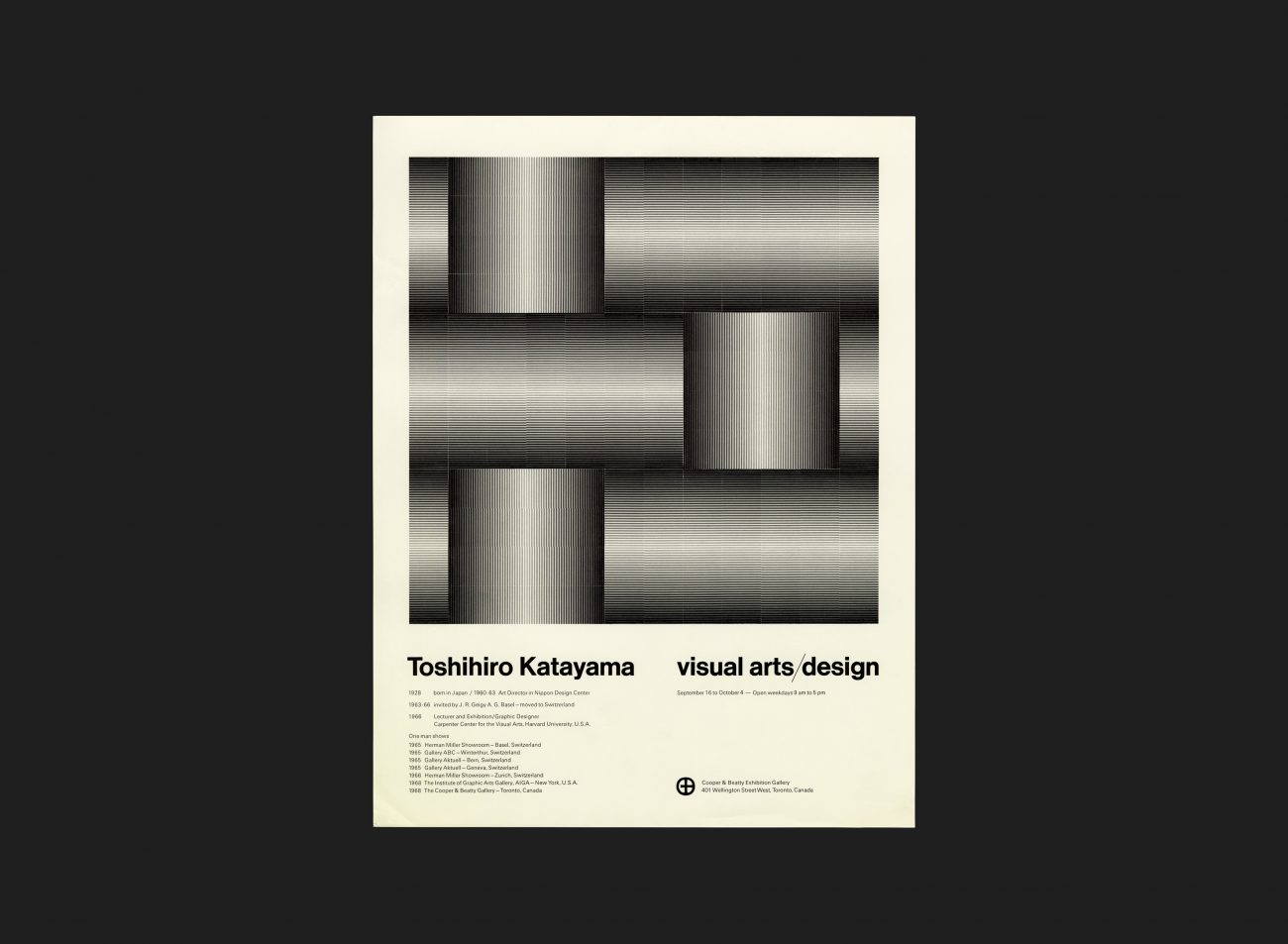 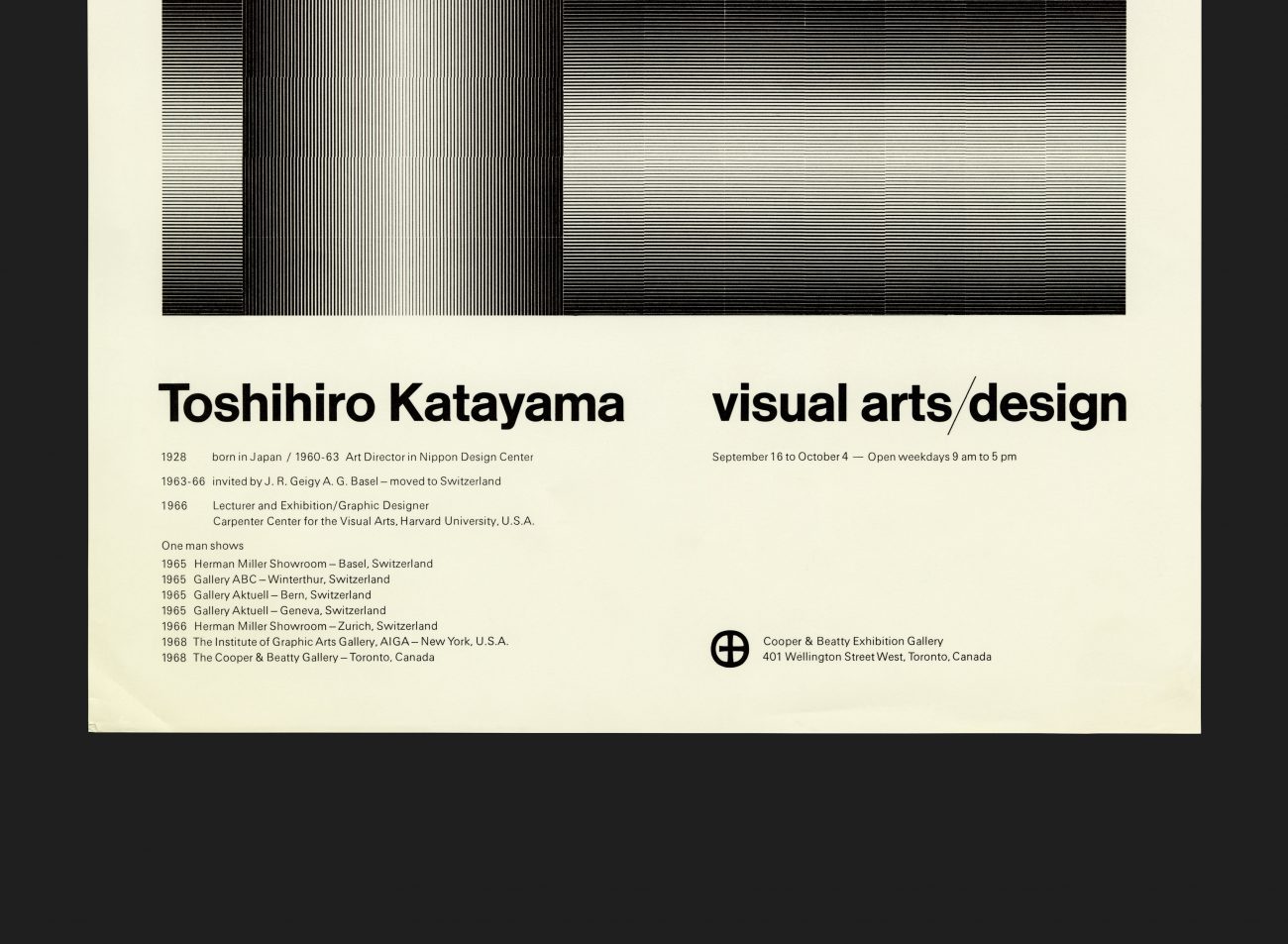 During the 1960s Cooper & Beatty famously held high profile exhibits at their Toronto and Montréal offices, many of these events in close collaboration with AIGA.

Toshihiro Katayama was a self-taught artist and designer, born in Osaka (1928—2013). After graduating, Toshihiro establishing himself as a designer in is native Japan, learning from his father within the family trade. In 1963 (age 35) he was invited to join the prestigious Geigy AG’s in-house creative department in Basel, Switzerland, where he worked for 3 years. In 1966 he was approached by the Carpenter Center for the Visual Arts, Harvard University, Boston, to join its prestigious teaching staff. After relocating to Massachusetts, he remained at Harvard for 30 years, serving as director from 1990—1995. His work is most well known for his incredible use of space, movement, texture and kinetic energy. He worked in design, painting, sculpture and three-dimensional environmental spacial works.

In 1968, with the help of AIGA, an exhibition of his work was held at the Institute of Graphic Arts Gallery in New York. It was this exhibition that was later relocated to Toronto after the show ended, allowing Canadians to witness his remarkable work. The poster features one of Katayama’s typical designs, strictly formed on a 12 column grid from horizontal and vertical lines of various graduating weight, producing a three dimensional woven aesthetic.

This poster was designed by creative director Jake Sneep who worked in this capacity between Anthony Mann leaving to join Rolf Harder, Ernst Roch and Al Faux as Design Collaborative in 1965 and Jim Donoahue taking the reins in 1969.