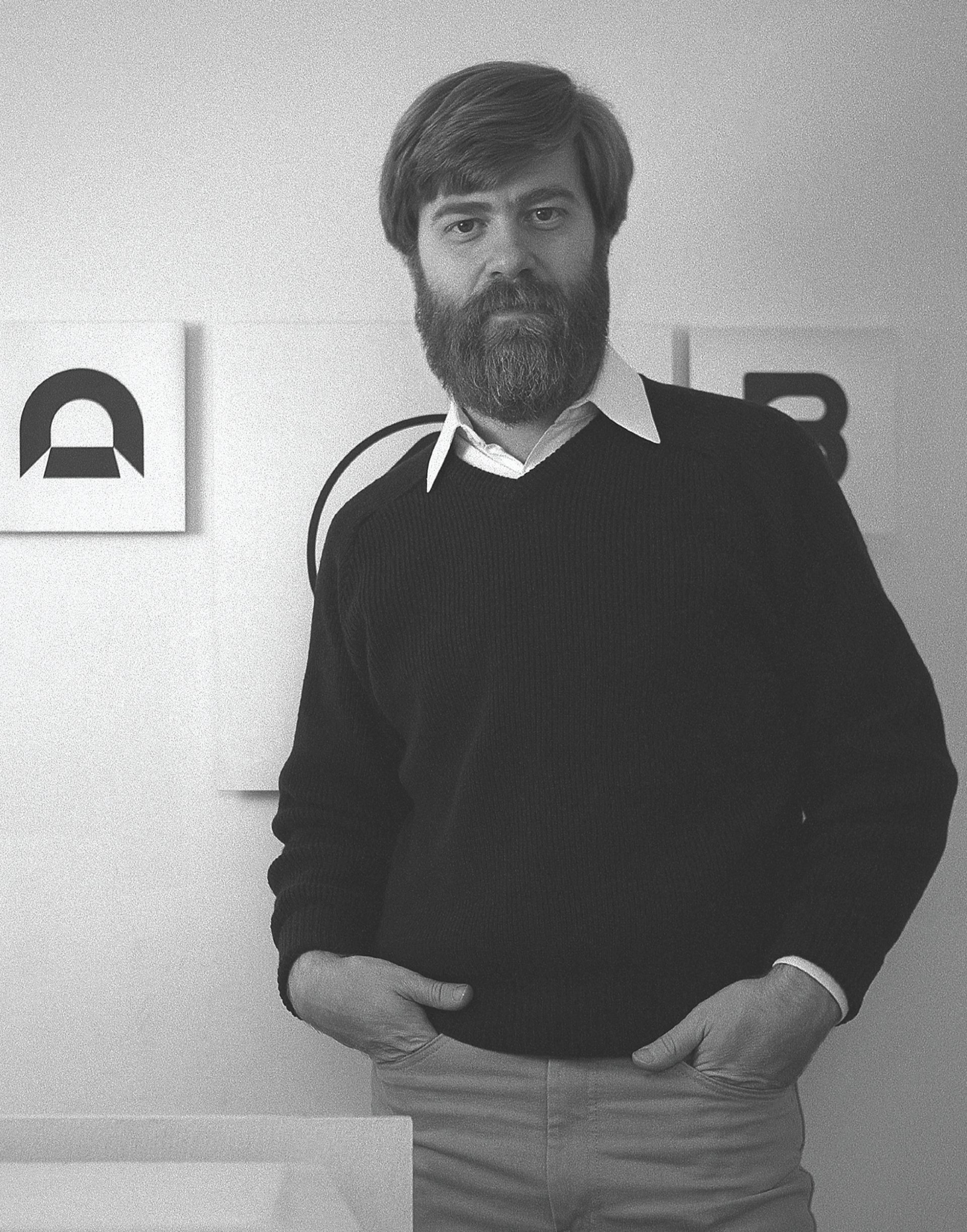 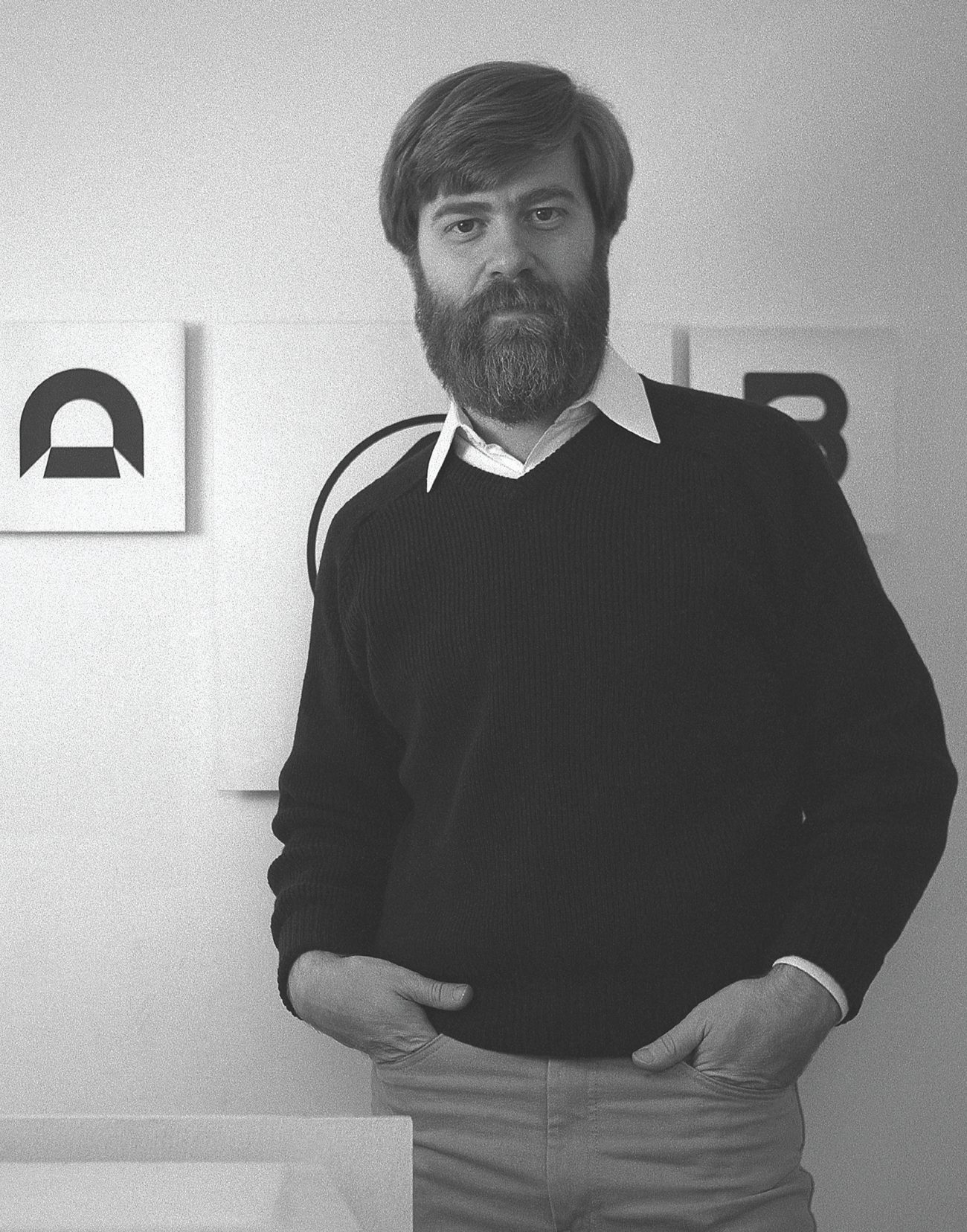 Although perhaps not as widely celebrated as some of his contemporaries, Glenn Fretz’s contribution to the period is nevertheless significant. It was while working for Norman B. Hathaway Associates in 1972, under the direction of Ernst Barenscher, that Glenn created what is widely regarded as the definitive version of the Ontario Trillium symbol.

Glenn initially started work as a sign painter in Kitchener. He had been intrigued by graphic symbols from a very young age, and persuaded his first boss, Harry Wainio, to let him create symbols for the firm’s clients that he would then hand-paint onto their trucks. His first taste of commercial success came in 1965 when, at the age of 17, Signs of the Times magazine awarded one of his projects “Truck of the Month”.

When Glenn visited Expo ’67, it blew his mind. He realised that this incredible design wasn’t only happening in Europe and the USA, but also close to home here in Canada. This realisation inspired him to gain a place at Ontario College of Art (OCA), but after only a year, Glenn became disillusioned. He felt there was far too much focus on illustration and advertising and not enough on the technical craft of design:

“The college didn’t have anything to offer me in terms of formal graphic design or typographic training, so I felt I had to pursue it on my own.”

Having left OCA, Glenn set out to find work, assembling a portfolio of actual and speculative design projects to shop around a number of Toronto agencies. When this initially proved unsuccessful, Glenn took a position at the University of Guelph in the audio visual department, producing presentations for professors. Later that same year however, Glenn received a call from Norman Hathaway, owner of the eponymous studio. Having got round to viewing his portfolio, Norman invited Glenn for lunch at the Four Seasons Hotel in Toronto:

“I had to wear a suit to be able to get into the restaurant. Norman was a very tall, distinguished-looking gentleman with a goatee. He drove a Rolls Royce and lived in Rosedale. I was just a small town boy.”

Norman offered Glenn a job, and soon he was working on projects for clients such as Gillette, Rowntree Mackintosh, Welch’s and the Ford Motor Company. Parallel to this Norman was helping Bill Davis, Ontario’s soon-to-be Premier with his political campaigning, and after he was elected, the firm was commissioned to develop a visual identity program to reflect the restructuring of the regional Government into six ‘super ministries’. Norman hired Ernst Barenscher to run the project, and Ernst selected Glenn to redesign the Trillium symbol, while he focused on the Coat of Arms. They then worked as a team (including Ernst’s wife Gundi) on the typography, wordmark and applications. The design manual was completed thereafter by the Barenschers.

After Norman B Hathaway Associates, Glenn joined Paul Arthur + Associates on the recommendation of a former colleague who had already moved there. After just a year, the company folded and Paul (who would become a regular collaborator with Glenn over the years) restarted the firm under a new name, Paul Arthur Limited. Much of the work was major signage and wayfinding projects for clients including the State of Oregon, the GSA (General Services Administration) in Washington DC and SUNY (State University at New York). Projects included bilingual signage for US Border Crossing Stations, signage and graphics for US Postal Service facilities, as well as an identity for a bank, “the Permanent” (Canada Permanent Trust Company).

In 1975, after investors had stripped Paul Arthur Limited of its assets, Glenn set up as an independent design consultant, supporting some of the clients that he had built relationships with during his time with Paul Arthur. These included projects for Canada Post, designing a quartet of icons for use in retail outlets that are still in use to this day, and the aforementioned the Permanent. In 1979, Glenn agreed to share a studio with ex-Gottschalk + Ash designer Anthony Goodhoofd, which before long led to a formal partnership as Goodhoofd/Fretz, that lasted until 1984. This union expanded with two other partners, Michael O’Dwyer and James Robinson to become Metafour Communications in 1984 and continued until 1990. During this period, the identity change of Massey Ferguson to Varity Corporation was completed by the partnership.

One client relationship that Glenn has sustained throughout his career came from his upbringing as a Mennonite in the Niagara Peninsula. In 1976, he was introduced to the executive secretary of the Mennonite World Conference in Chicago. This introduction led to his help being sought for the next conference to be held in Wichita, Kansas. Glenn had such an impact with his advice that he went on to become the organisation’s primary designer and advisor for the next 40 years. Over the years he has worked on everything for the sexennial event including brand identity, publications, signage, exhibition displays, merchandising and staging, extending into all facets of the church worldwide. This association also led to his identity design for the North American Mennonite Church in 2000.

“Without relationships, design is basically a science. It’s my job to bring some humanity into it.”

Glenn retired his commercial practice in 2020, and today spends his time focused on personal creative projects from his home in Waterloo that he shares with his wife. It’s here that he gets to combine his love of craft, industrial design and sustainable technology.

“I drive an electric car, contribute power to the grid from solar panels on our roof and try to consume as little as possible. The idea of being able to live sustainably is one that I continue to pursue.”