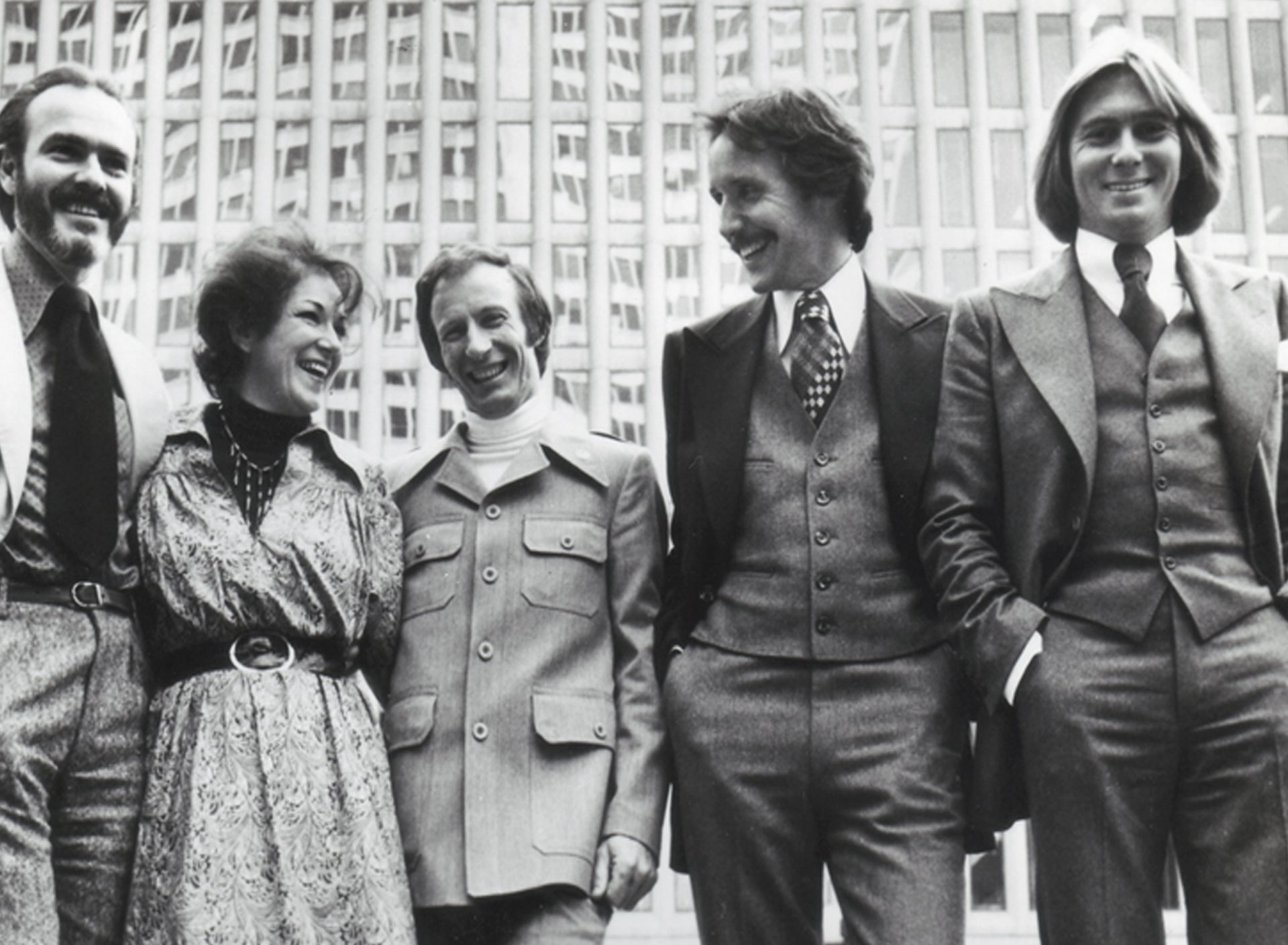 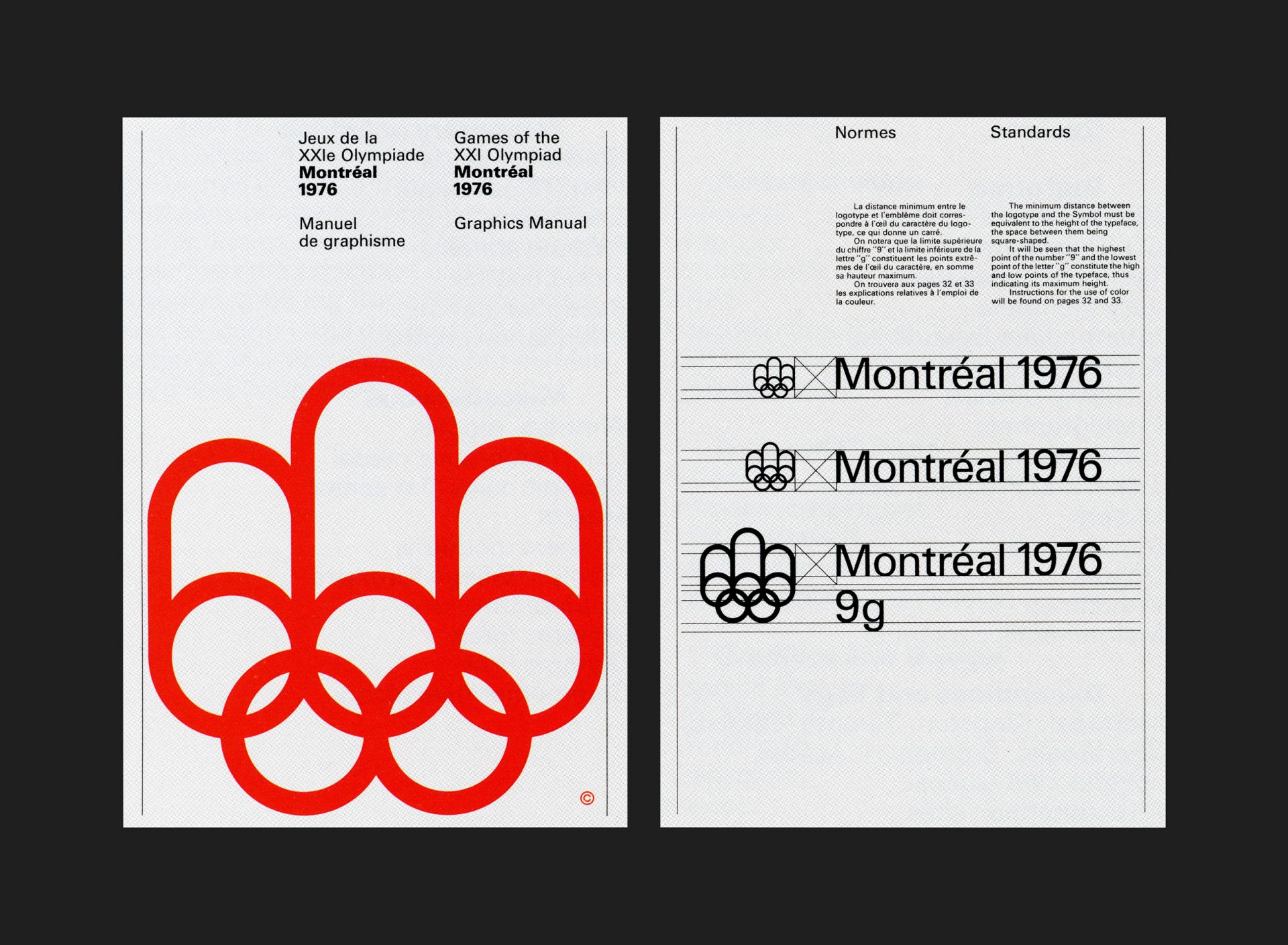 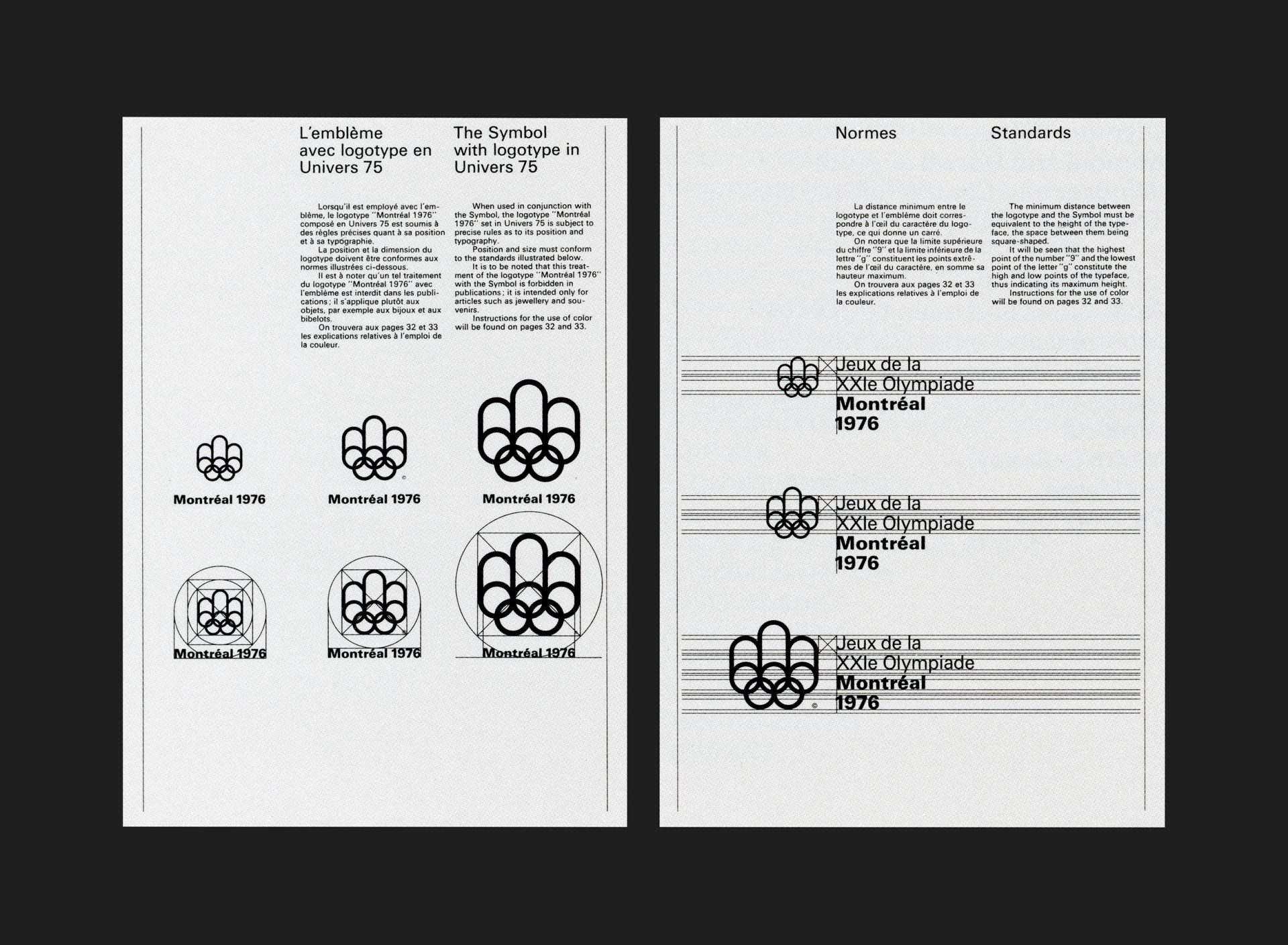 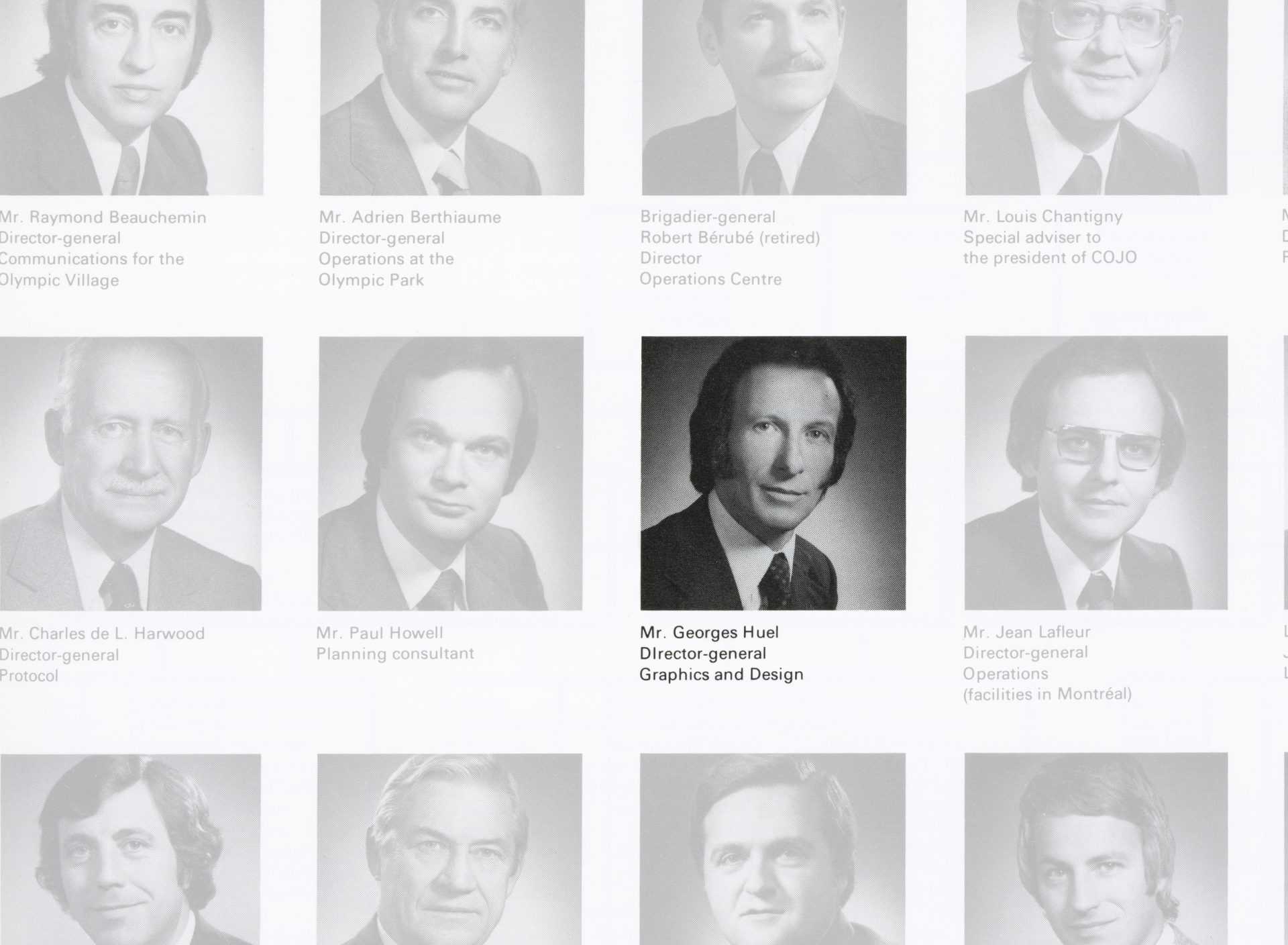 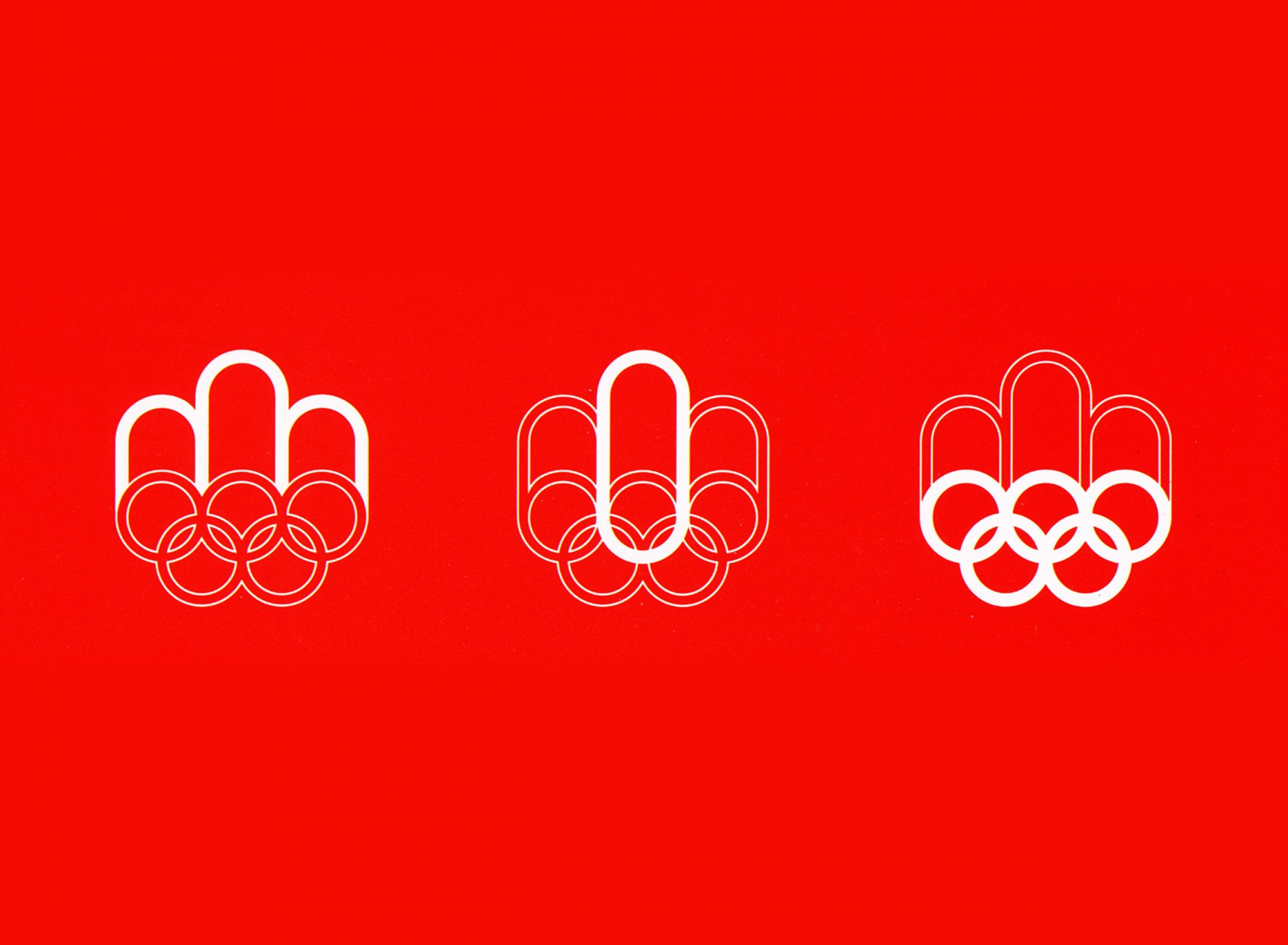 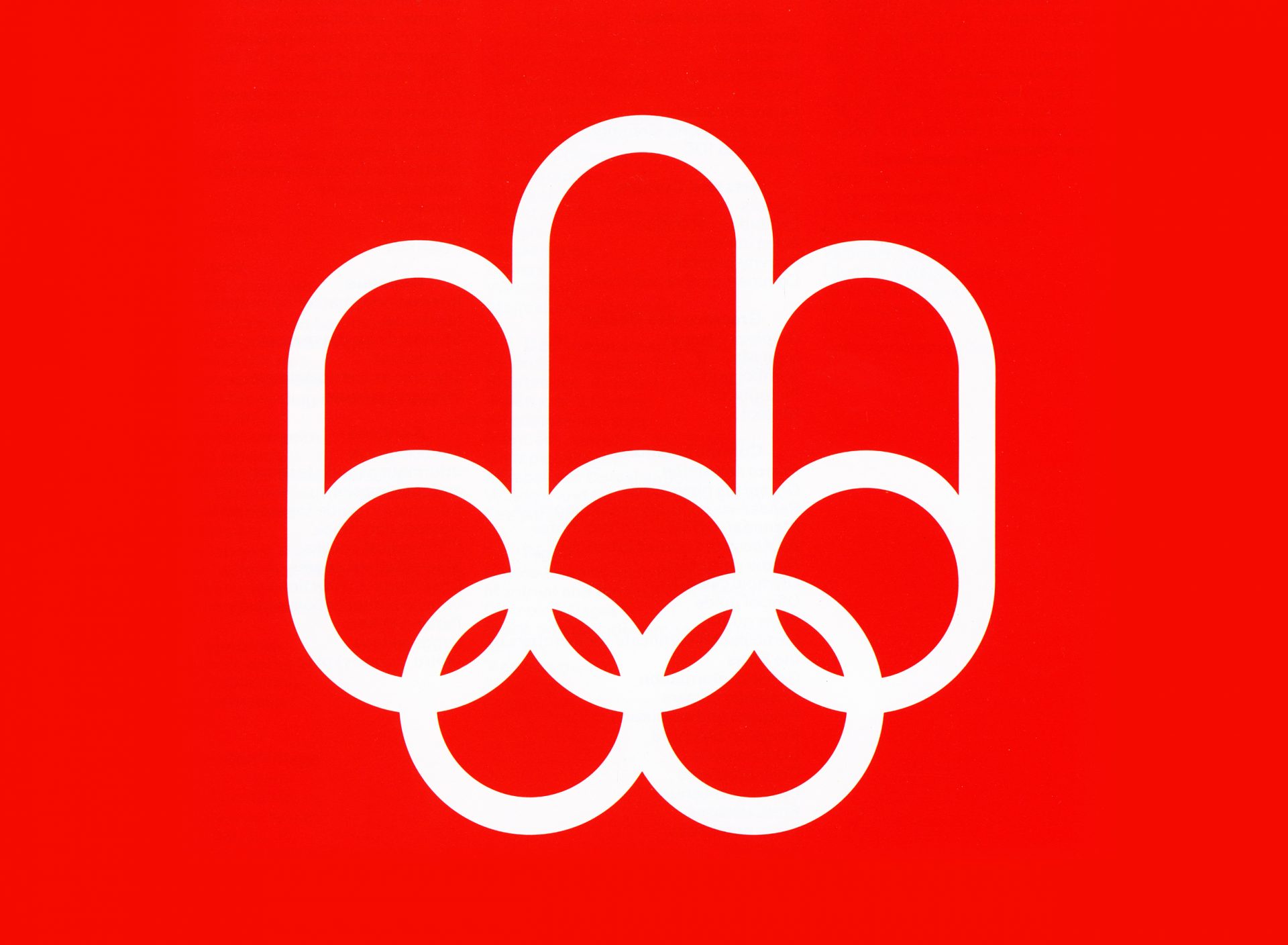 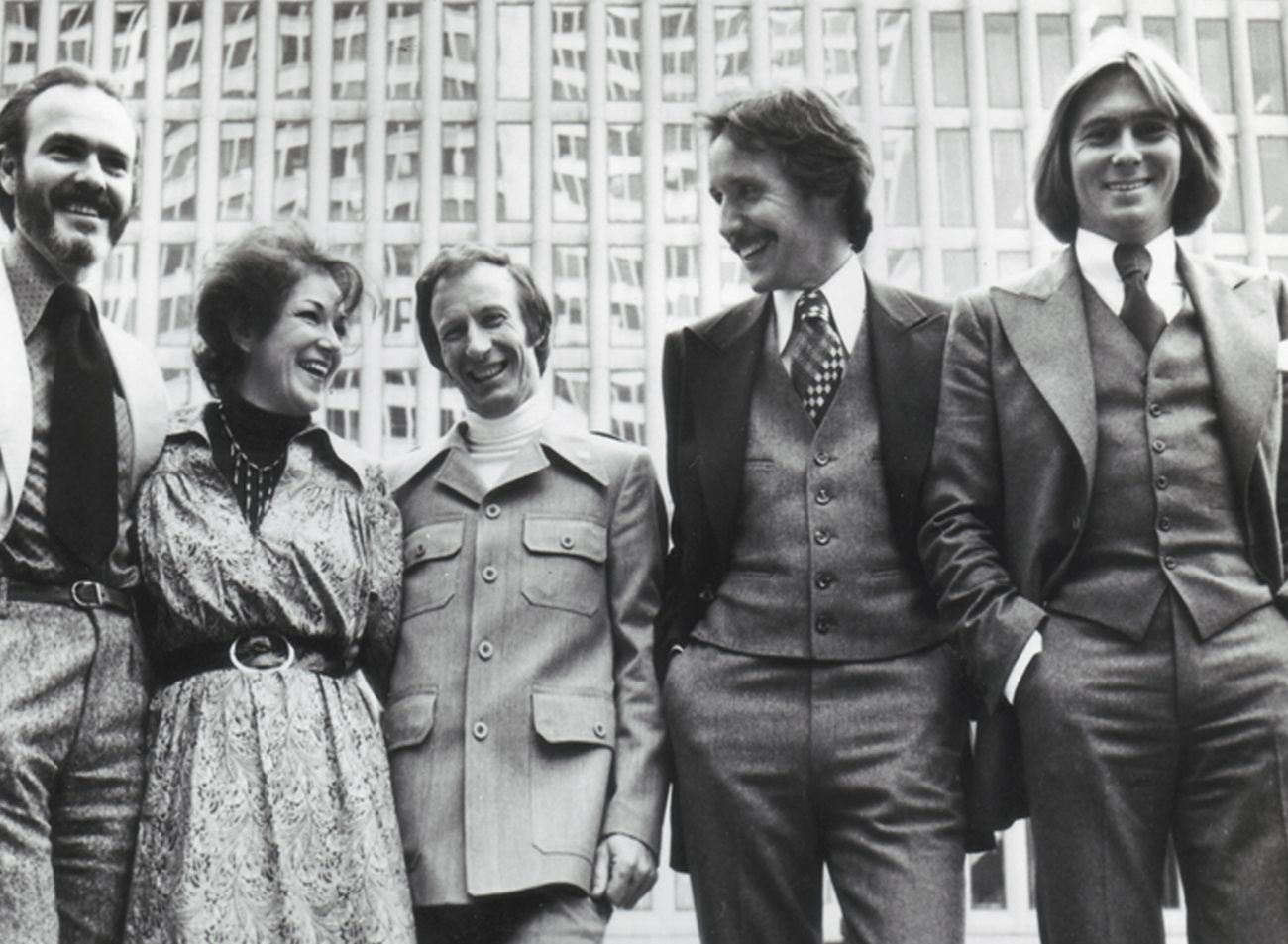 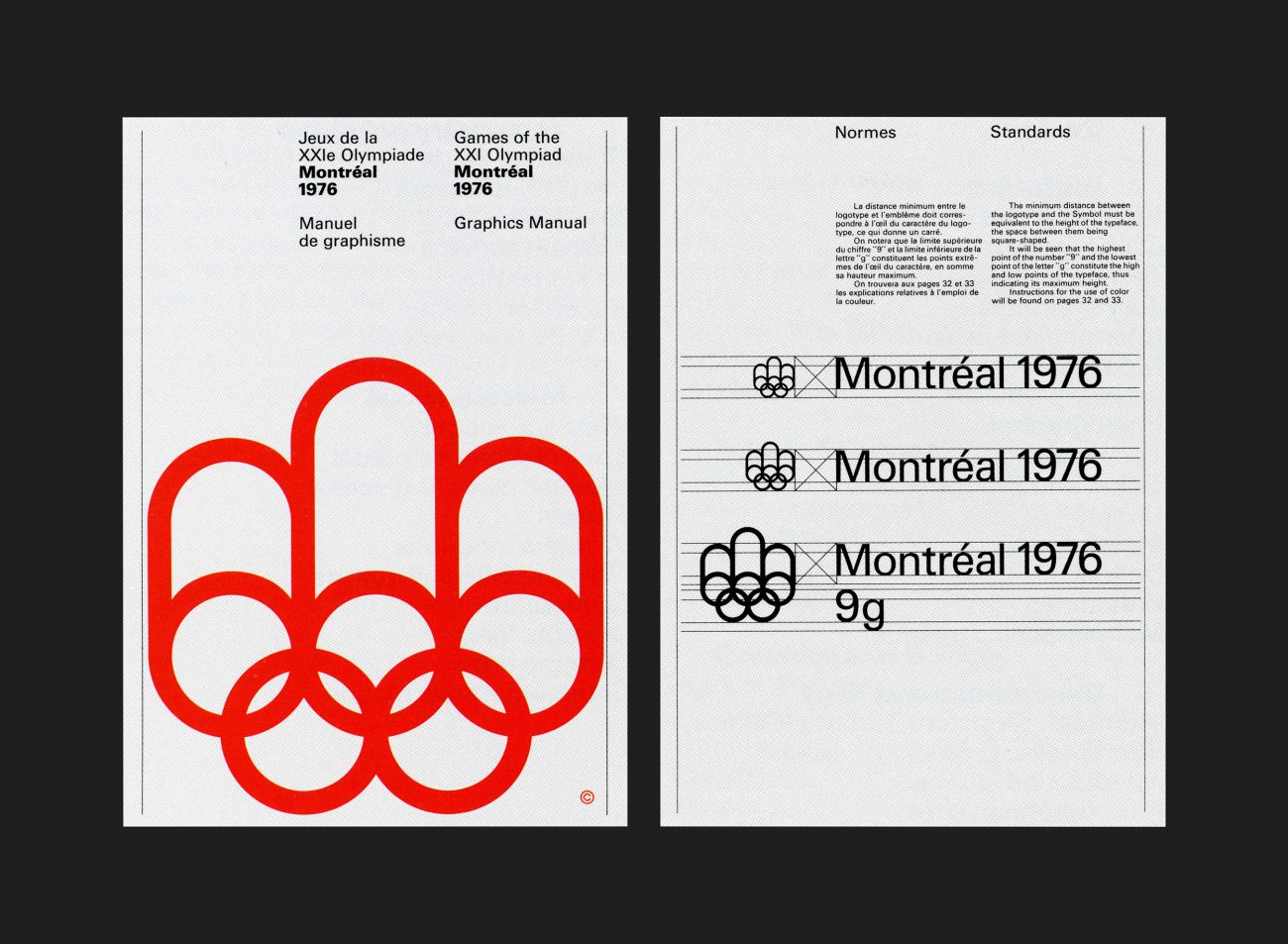 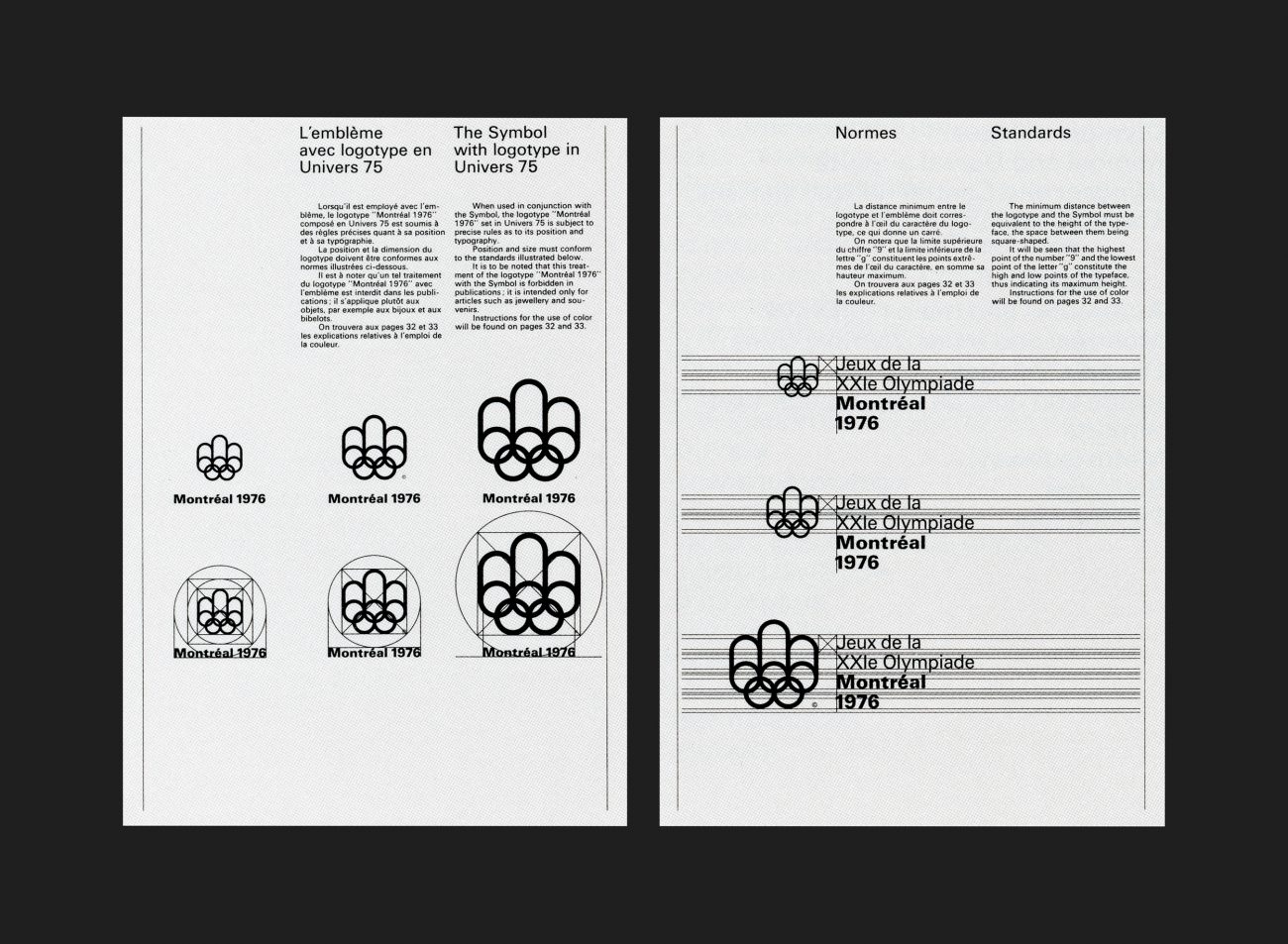 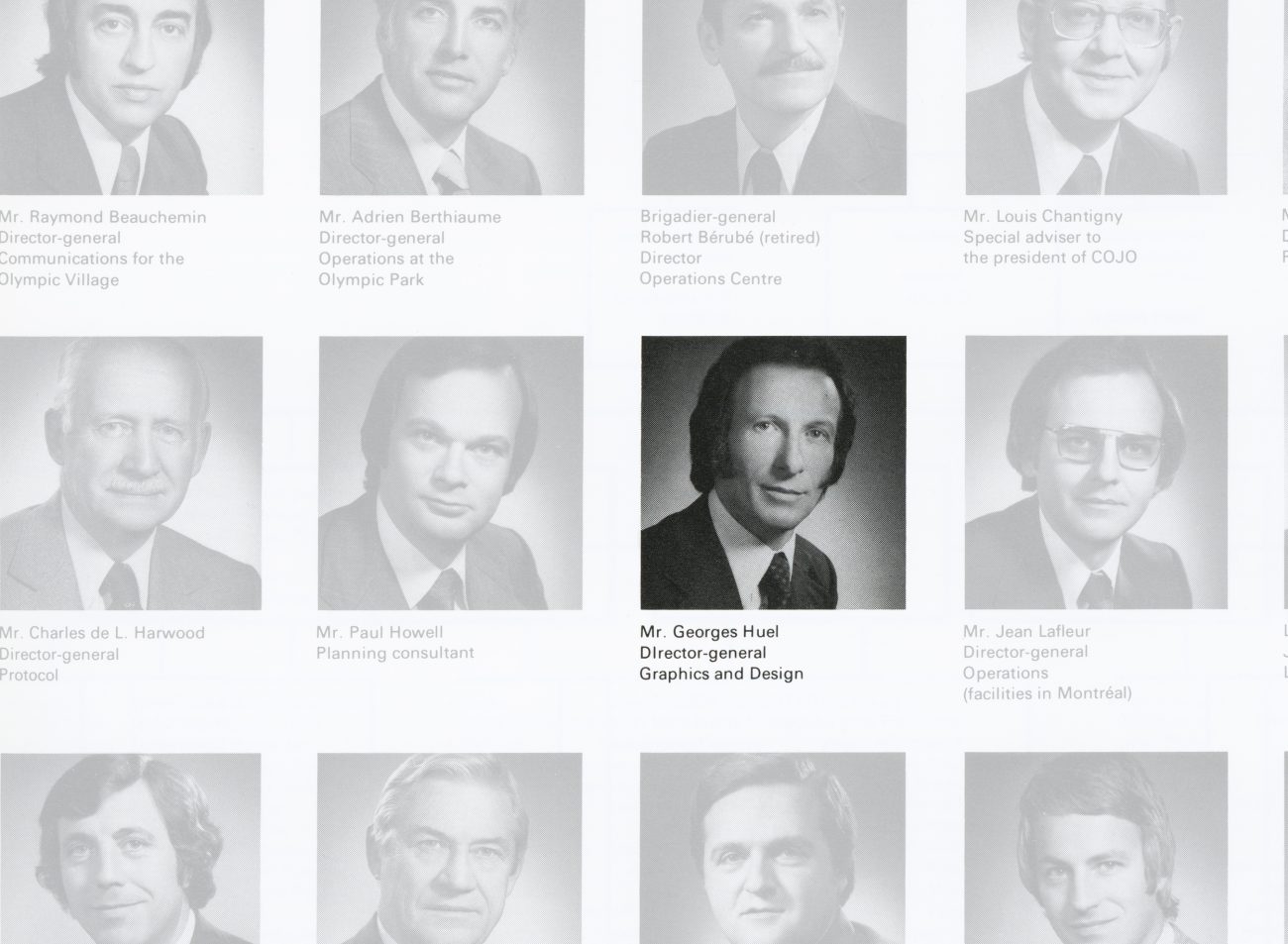 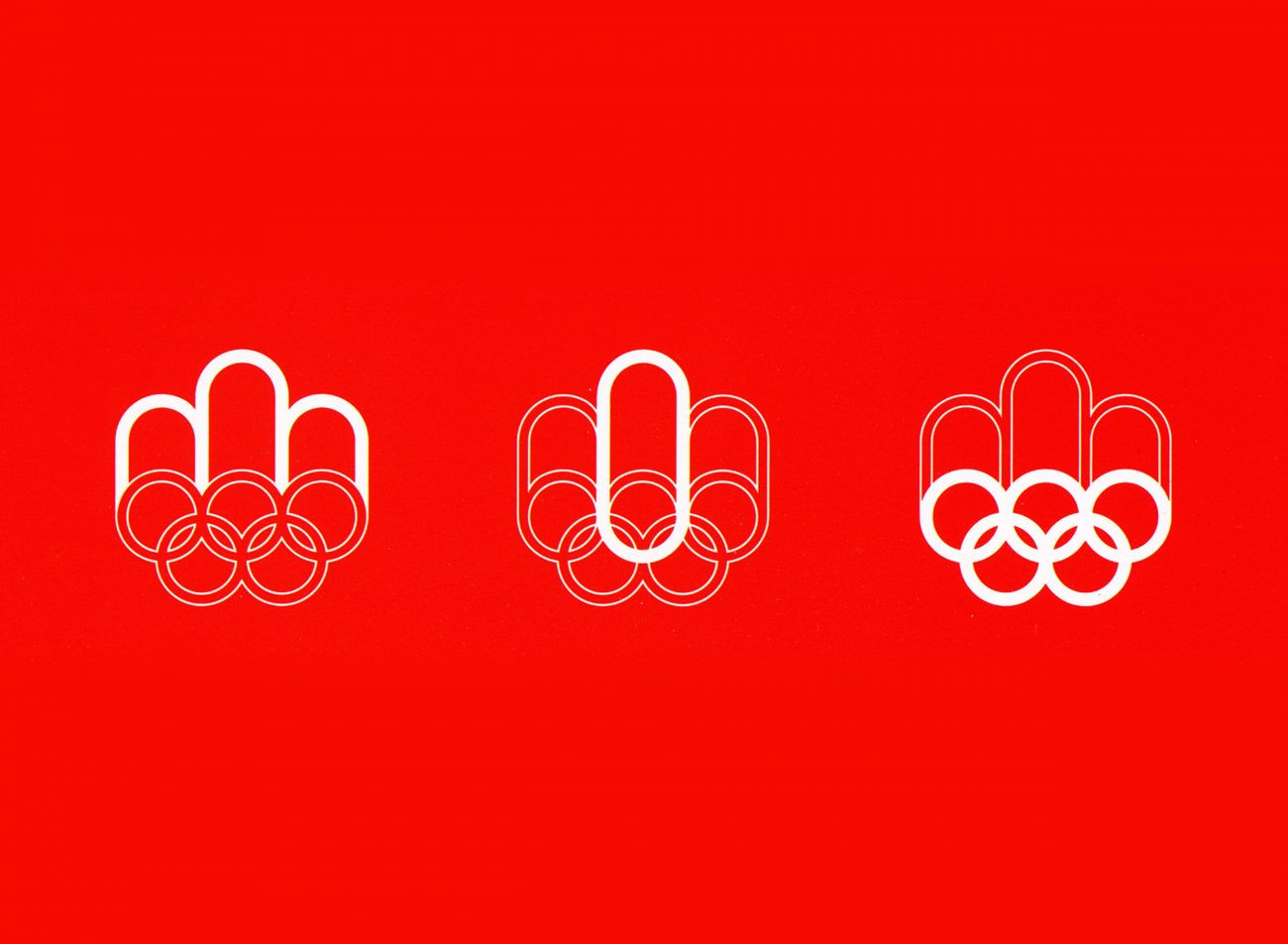 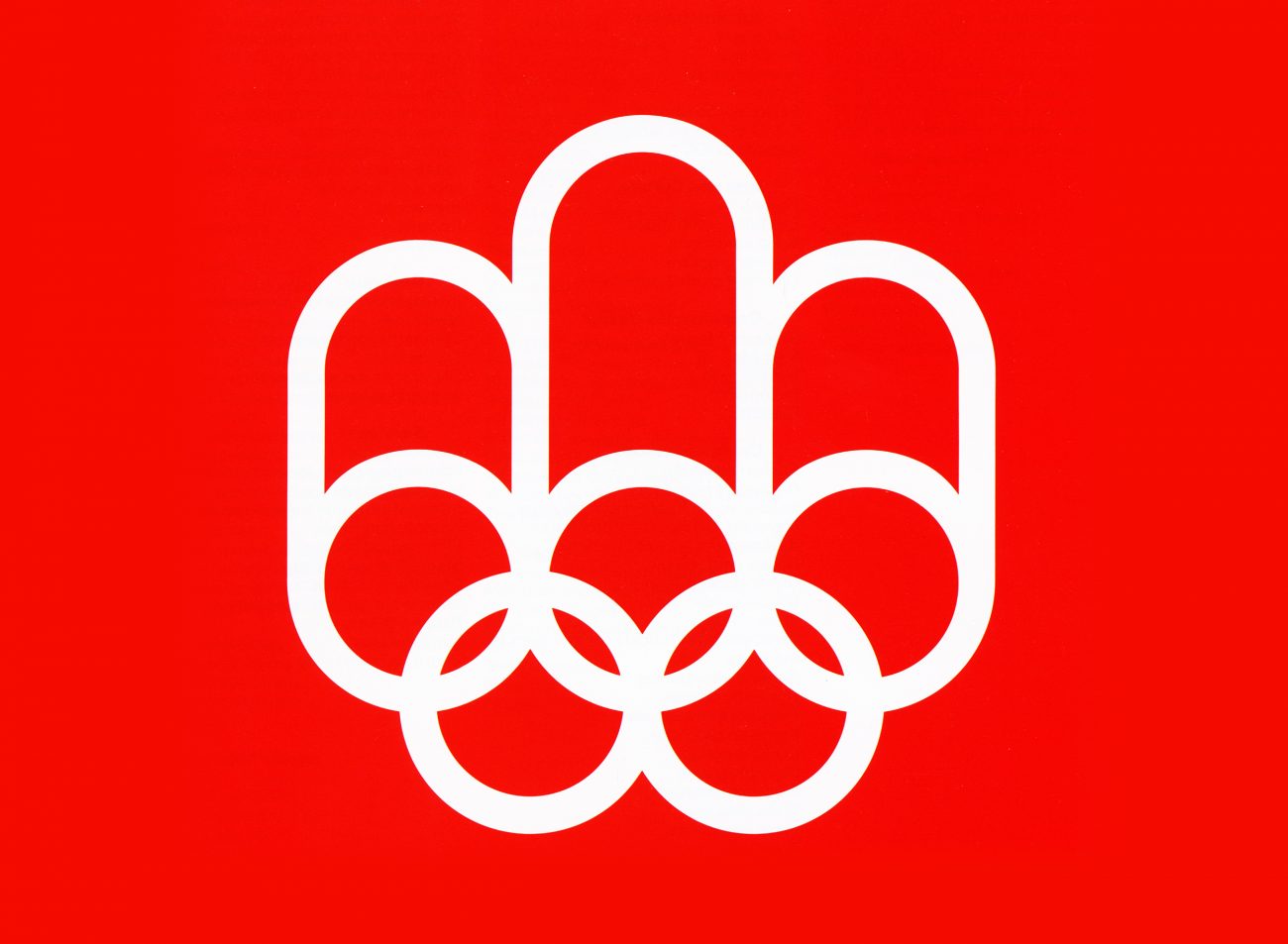 New variations on an ancient theme, expressed in a detailed graphic master plan.

Montréal was awarded the 1976 Games on May 12, 1970, at the 69th IOC Session in Amsterdam, over the bids of Moscow and Los Angeles. It was the first Olympic Games held in Canada.

The Montréal ’76 logo itself, an icon of Canadian design and a rare, but compelling example of political nepotism gone right. Unlike many Olympic logos, the Montréal emblem was not the product of open competition. Instead, Montréal’s Mayor Jean Drapeau awarded the job to friend Georges Huel, an accomplished designer in his own right.

Georges Huel is the first to admit that his logo for the ‘76 Olympics is so simple, so obvious, and the M for Montréal such a natural extension of the five Olympic rings, that he is tickled nobody thought of the design in time for Mexico or Munich.

‘Munich used two different symbols,’ reflects Huel, ‘and the five Olympic rings were put at the top.’ He felt that Mexico’s optical Aztec effect was attractive but that it was a detailed and intricate way of expressing both the Olympics and Mexico. Added Huel: ‘I wanted to work with one symbol … clean and neat.’ Maximum effect through symmetry, simplicity and economy is what Huel’s work is all about. Two other symbols emerge out of his design in Canadian flag red. The M also represents the podium on which the three winners stand to get their medals, and the stadium track is in the centre of the logo, linking the middle curve of the M with an Olympic ring.

No open competition was held for the logo, but many people sent subjects to Montréal’s mayor, Jean Drapeau, from all over the world. Drapeau and Huel had known one another for some time, and it seemed obvious to everyone that the mayor would choose a French-Canadian designer. He asked Huel to his home on three successive Saturday mornings for detailed discussions about the logo, before making his decision.

Huel, a 43-year-old graduate of the Graphic Art School in Montréal, was born in Saskatchewan; but he has spent most of his working life in Montréal. In April ‘73 he left his job as vice-president and art director of the Montréal printer Thérien et Frères to direct the Olympics graphics programme and build up his team. His background in printing, coupled with his early training, during which ‘we learnt all about type setting and printing presses,’ has had a profound influence on his approach to design. ‘It’s good for graphic designers to know so much about printing … it helps you to know if it is possible for your design to be reproduced.’ His past work has included dust jackets for books, logos, annual reports, posters and brochures: experience which will have a direct bearing on his work for the Olympics.

Expo ‘67 brought Huel his first major award: it was for the poster of a man’s hand with the thumb and index finger touching. He also won the stamp contest but the post office didn’t want to use his design because they considered it ‘too modern.’ He is facing a similar conflict with bureaucracy now. Although his Olympic logo was designed with a keenly practical eye for the widest possible range of applications, Huel is upset that he does not have full control over its use on stamps and coins. ‘Although we designed the first four coins,’ he told me, the federal government didn’t want us to get involved with the stamps. That’s the difference between us and Mexico.’ An array of different artists and designers has been selected by the Olympic committee for the stamps and coins. ‘A man who has been in the army for a number of years,’ says Huel scornfully about one committee member, ‘what does he know about design?’ To illustrate his point he brings out a set of stamps, and a manufacturer’s sample sweater in Olympic red and white, and proves with a scale ruler that the logo lacks the exacting proportions and harmony he specifies in his graphics manual. The casual onlooker wouldn’t even notice. But it is a source of disquiet to Huel.

Whereas he feels a sense of alienation from the stamps and coins, his excitement is infectious when describing his design for the Olympic mascot, even though at the time of the interview it was a state secret and Huel took some persuading before enthusing about it. Predictably enough, he has chosen the beaver but has designed it like a piece of modem sculpture.

Compared with Mexico and Munich, the cost and scale of preparing the graphics for the XXI Olympiad is modest, low key, and distinctly home-grown. Mexico used big names like New York based design associates Lance Wyman and Peter Murdoch (now head of Murdoch Design Associates in London) and a multinational team headed by former Columbia university professor of architecture Eduardo Terrazas. Munich used 43 graphic designers. By contrast Montréal will use seven full-time and some freelancers. All will be handpicked by Huel by January ’75. He talks in terms of a $3m budget for signage and decoration and $3.7m for printing. The sum is considerably smaller than that of Mexico or Munich.

For his deputy, Huel chose another graduate of the Montréal Graphic Art School, Pierre-Yves Pelletier. It was Pelletier who persuaded Huel to use Univers type (like Munich) instead of Helvetica as Huel wanted. The two men argued and then Huel agreed that Univers was the most complete type, and therefore suited to a big programme. ‘They decided to use both 55 (roman) and 75 (black), the one variation on Munich where only 55 was used.

During the past two or three months, Huel, Pelletier and their team were playing around with the first progressives for costumes, signage and brochures, both for the games’ sites and the Olympic village. Ideally Huel would like their graphics to be more personal and informal than Munich’s, in contrast with the ‘more rigid and mechanical’ style used in Germany. Like the Germans he will use athletes in the pictograms, but he wants his to be more relaxed and happy looking. He wants a distinct change from Mexico where symbols of the actual sports were used. He is also keen to get a Canadian image across, and feels that the red of the national flag in the logo, the M for Montréal and the beaver are not yet quite enough. For the Olympic colours he decided on strong contrasts, ‘different from Munich where pastels were used,’ and his own private way of expressing the Canadian climate: ‘we have definite summers and winters.’ The colours are red (officials); blue (press); grey (protocol); green (village); orange (services); yellow (technology); purple (arts and culture); magenta (tourists).

One idea that appeals to him was borrowed directly from Expo ’67 : that is the use of different animal symbols on a parking site to help people remember where they have parked. It worked well,’ he says,’people liked it and it was funny.’ Huel is also aware of the confusion caused at Expo because of the similar signs on the ‘ladies’ and ‘gents.’ In his own offices he has pinned up amusing cartoons on the two doors and this is likely to be his style for the Olympic lavatories. Being French-Canadian, Huel has grown up with bilingualism in his blood stream, and with the need to communicate easily and graphically with polyethnic Montréal and Canada. So designing for the multilingual Olympics comes naturally to him.