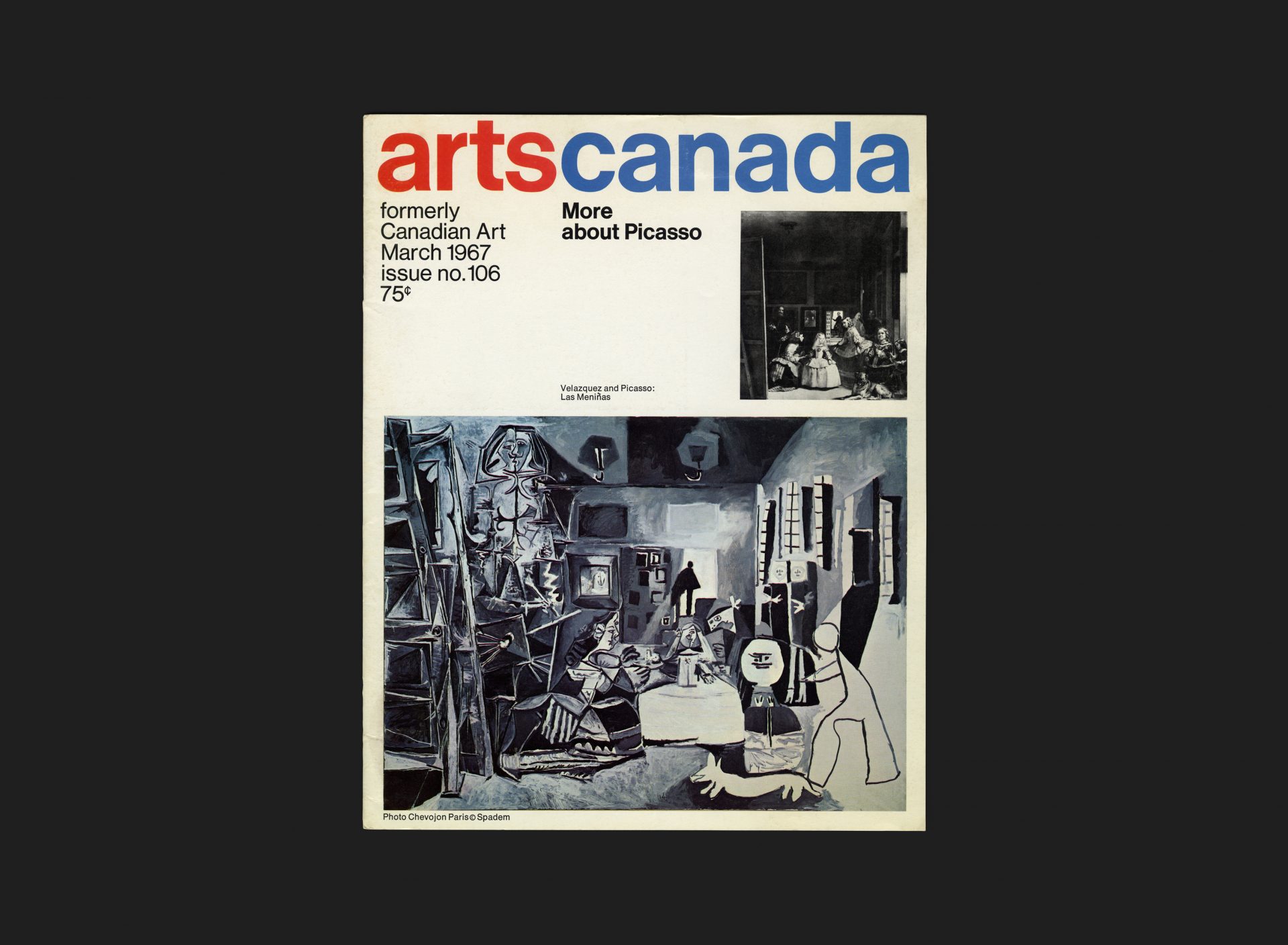 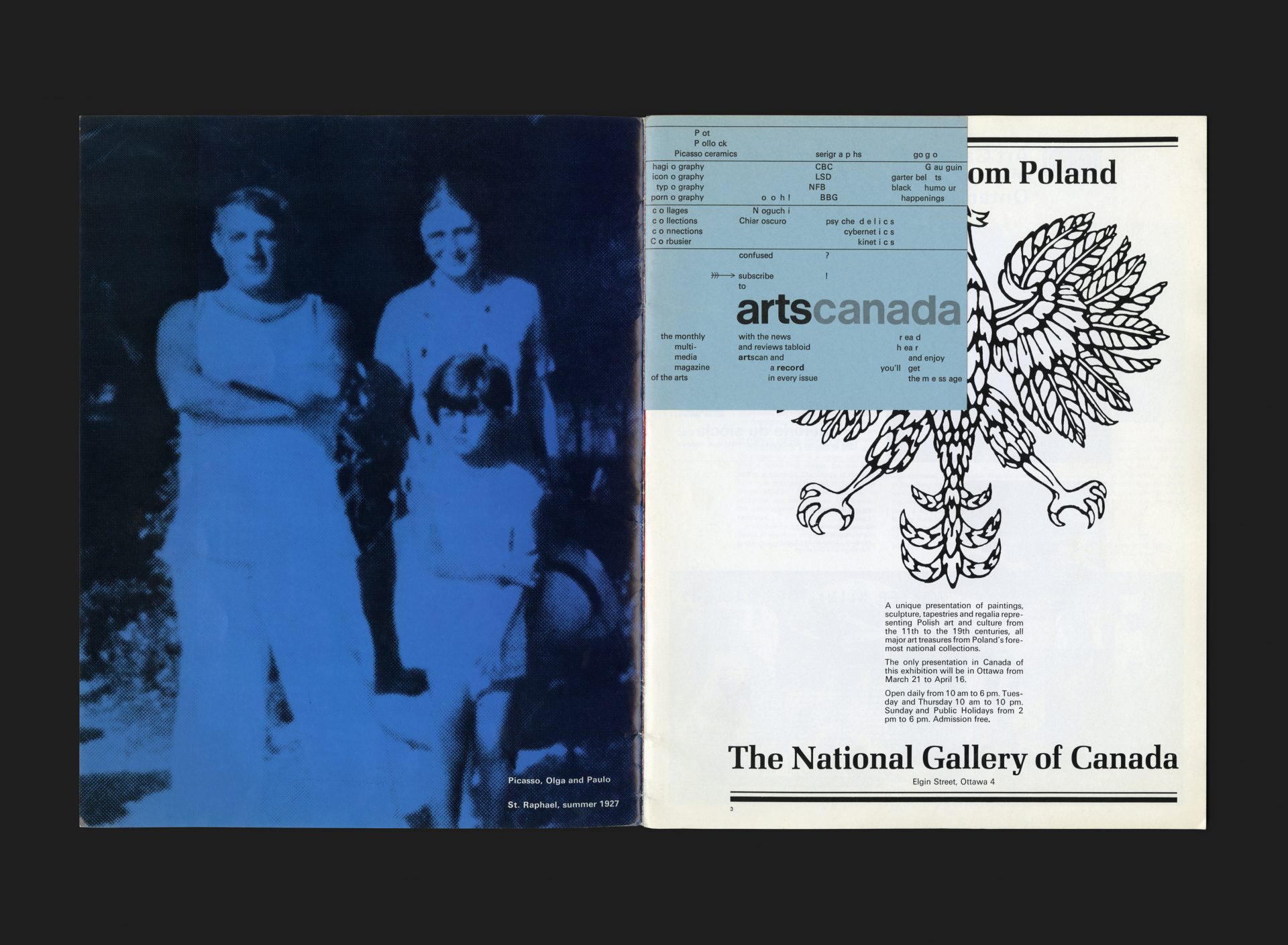 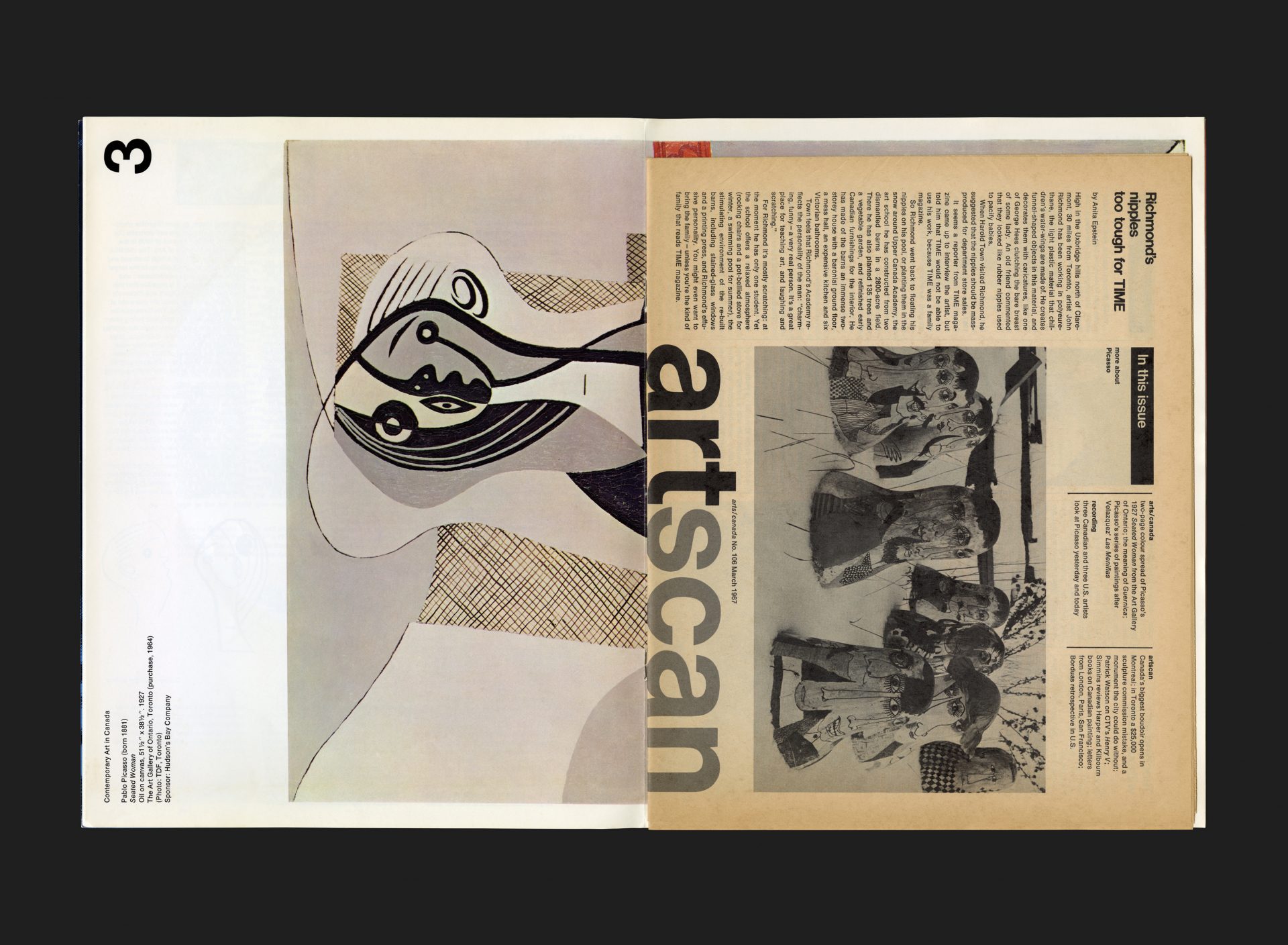 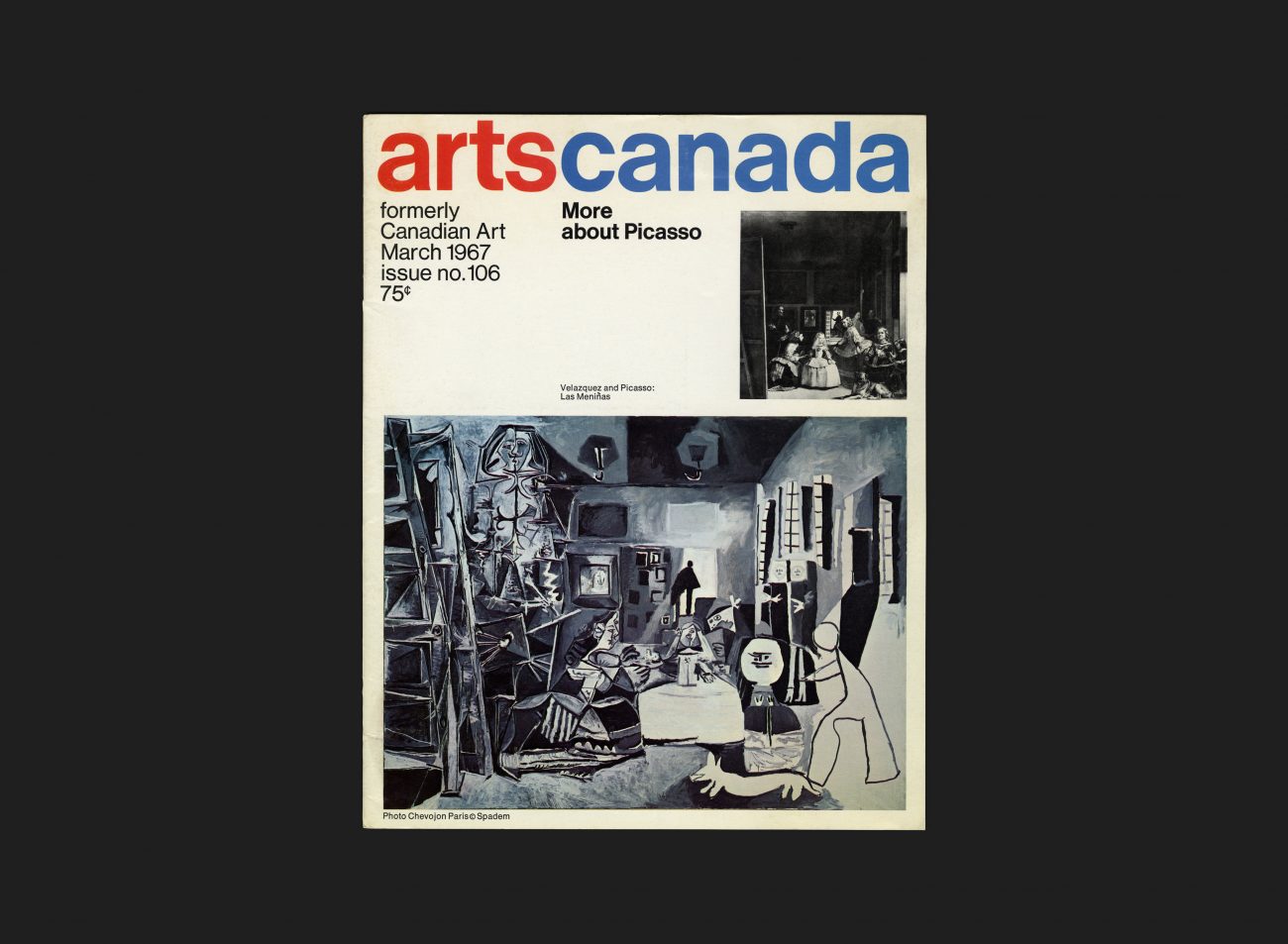 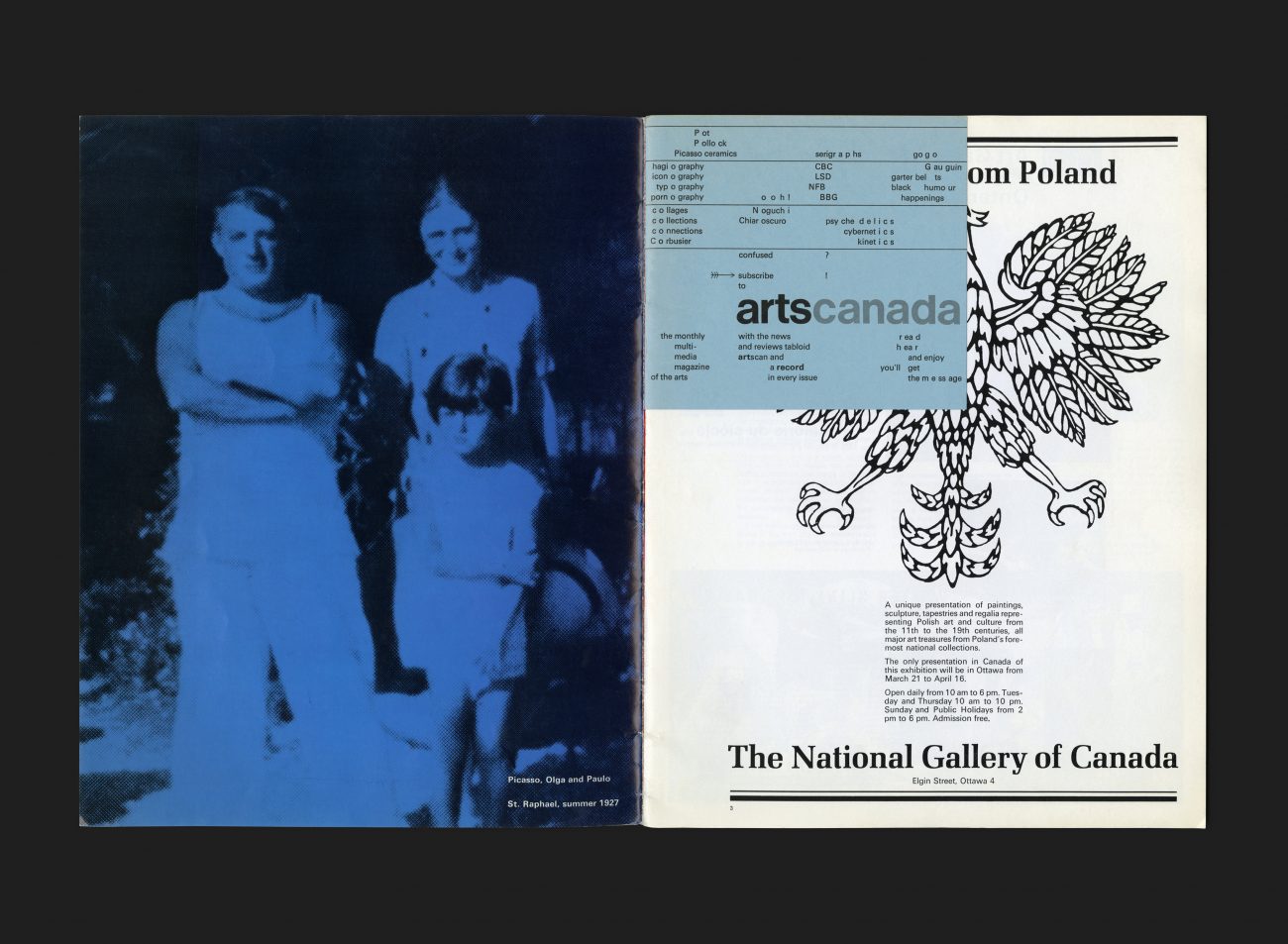 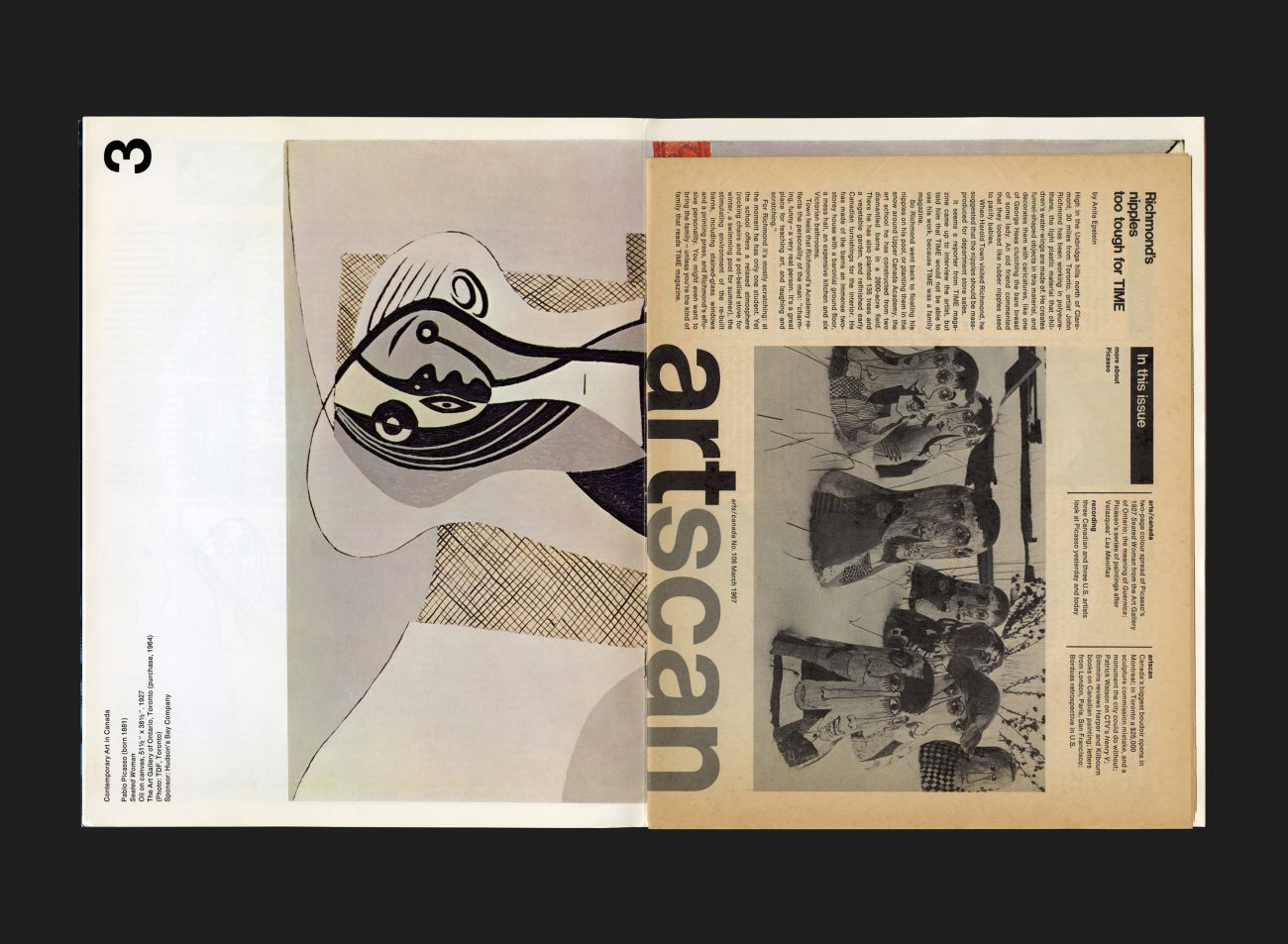 Canadian Art started life in 1940 as ‘Maritime Art’ and was produced by Walter Abel, a professor of Art at Acadia University in Wolfville, Nova Scotia. In June 1941, and with the assistance of the National Gallery of Canada, the magazine evolved into Canadian Art. In 1958, Paul Arthur became the managing editor and designer of Canadian Art where the publication went through a significant redesign process — to much acclaim. In late 1966, ahead of the centennial and with newly appointed editor Barry Lord, the publication changed its name to ‘artscanada’, launching in January 1967. This involved another radical, unconventional and ambitious redesign. Part of the approach to the new magazine format included it being sold in a clear poly bag. Each issue released included a 7″ ‘flexi disc’ and a tabloid format ‘newspaper’ entitled ‘Art Scan’. The philosophy of this new direction positioned it as a new critical awareness, outside the predictable, traditional restrictions of genre and geography, and refocused visual art as a shifting and changing cultural paradigm. During this time a respected American editor was quoted as saying that artscanada was “the best North American art magazine published outside New York.”

This issue of artscanada, released in March 1967, was of course the 3rd to be published in this new format. It is dedicated to Pablo Picasso and featured several articles on his work and life to date (Picasso would die 6 years later). The magazine section takes a more formal approach to the thematic articles, whereas the newspaper introduces a more news driven and global perspective — providing exposure to events, exhibitions and celebrity within the art world. Sadly the flexi disc is not present.

The magazine stayed under the artscanada name from 1968 to 1983 when the Society for Arts Publications (the publishing arm responsible for the magazine) ceased trading. The title was then transferred to the partnership of Maclean Hunter and Key Publishers and retitled ‘Canadian Art’ again. In 1991 it was further migrated to the newly formed Canadian Art Foundation, which received charitable status in 1992, and this is how the magazine remains to this day.